Wither height is a characteristic feature of each canine breed. The size determines the typical appearance decisively, but is at the same time important criterion for the specific use.

In the sector of family- or companion dogs, small breeds dominate. In working dogs we see a wide spectrum of size, depending on the usage. When once Rittmeister von Stephanitz chose the base dogs for the German Shepherd from local herding dogs, he had the medium-sized working dog in sight, which is suitable for many fields of application. Intelligence, obedience, trainability and willingness to cooperate are fundamentals for working on the herd. In addition, the natural vigilance, coupled with a pronounced protective instinct, has been a good basis for his vision. The standard of the German Shepherd Dog was formulated and written down, practically as a breeding goal or guideline in respect to ideal working dogs.
The size is explicitly mentioned there: bitches of 55-60 cm, males of 60-65 cm. In this range of variation, it should be possible to master all fields of application in an optimal manner. The bitches are about 8% smaller than the males, which is the same in almost all canine breeds.

The trend to size

Today one observes that the German Shepherd is gradually and steadily increasing in size and is breaking out of the limits of the standard more and more. Mainly in the show sector, the large impressive dogs are an advantage and bitches close to the male size are preferred. This leads to creeping breeding progress in size. That judges sometimes round off the measured withers height generously and do not discard good dogs from breeding only because of some millimeters oversize, is actually understandable.

Lothar Quoll, responsible for breeding in the German Shepard Breeding Association (SV), had presented detailed analyzes of the size and also showed how strongly the show dogs differed from the working dogs. As a result, a working group "size" has worked out proposals on how the German Shepard can be returned into the limits of the standard. In a small circle and in several meetings of the breeding committee and the breeders, strategy concepts have been developed, which are formulated in the recently adopted breeding plan. It is a long-term concept, applied to several dog generations.

Who ever wants to breed successfully needs information. Measuring the dog itselve is not sufficient for efficient breeding. It is necessary to know about the size of parents, siblings and parent’s offspring in other litters. If a dog is already or still in breeding use, one critically has to observe the wither height of his already existing progeny taking in account the size of the mating partners. All this is difficult to bring together correctly for a breeder. A good computer system and proven statistics must help the breeder and give him a valid expectation about average size for a defined planned mating.

Traditionally, the size of the dogs had been recorded at “Körungen”, the breeding approovel where males and females were judged for breeding. Quickly the fear came up, that these data were unusable, because the data are preselected and measured downwards. Parallel in the last years dogs have been measured on all shows, first unofficially, later mandatory. The exposure of the breeding limit of 60 or 65 cm as a culling level was an important step to avoid rounding off. The many parallel measurements on the shows gave a good picture of the actual variation in size. Figure 1 shows the frequency distributions of the data, separated by sex.

In males (above) and bitches (below) we can see the same shape. The previous data are practically cut off at 65 cm in male dogs, while the new representative measurements vary symmetrically and, like any other biological feature, varies normally beyond the standard limit. The same picture is shown in bitches, but shifted downwards for ca. 5 cm.

Fig.1 Wither Height at Licensing (WH_alt) and at Shows (WH_neu) separated by Sex 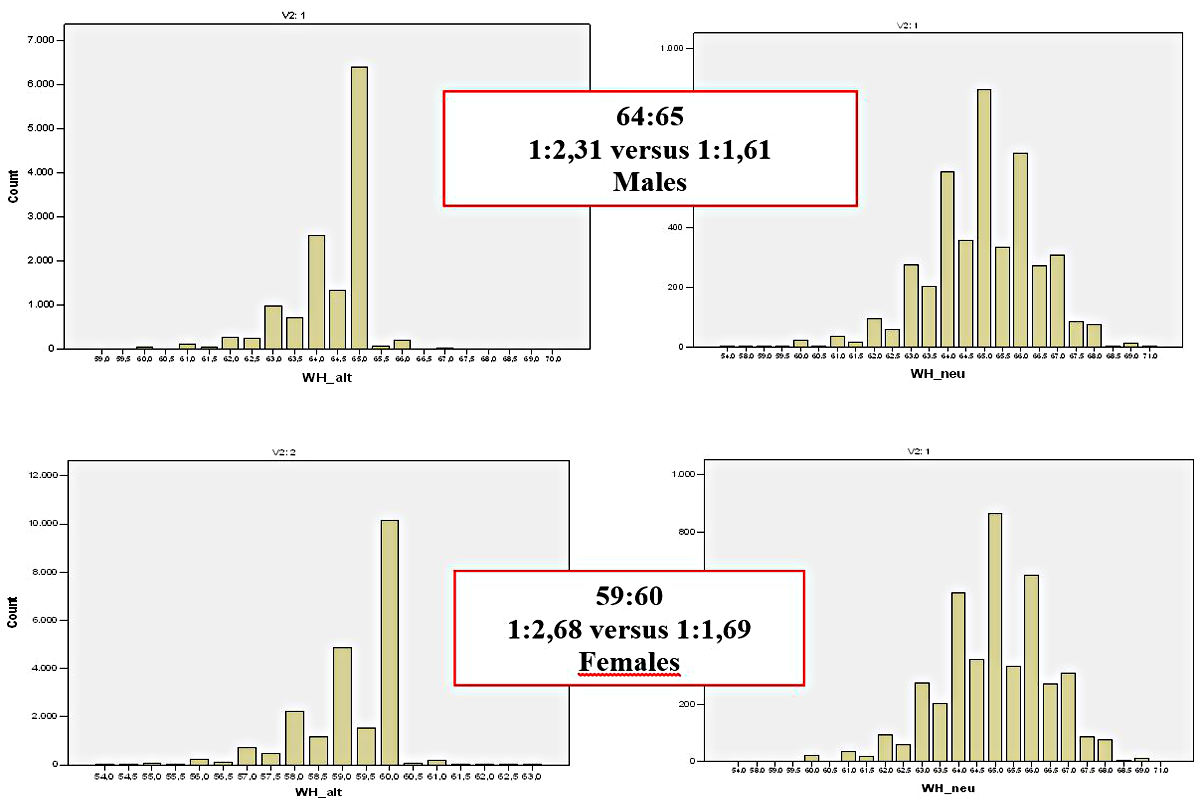 If it is assumed, that Körmeister/judges make no distortion of the measure in 64 cm dogs (clearly within the standard), this frequency can be regarded as a reference. In the old measurements the 65 cm dogs are 2.31 times as often as 64 cm dogs. For the representative measurements on shows, they are only 1.61 times as frequent. This proves that oversized dogs are trimmed to 65. But not all of them, a part of the very large dogs, up to 70 cm, probably did not appear on breeding licensing. Both, the summation of the animals at the standard border with the slightly oversized dogs as well as a lack of extremes, modify the true picture.

But this is not unusual in breeding. Think of hip dysplasia (HD). More than 60% of dogs are HD-free. An average is defined as 50% of cases are over and 50% below it. Having 60% free then in this HD-free animals are also animals with below-average hips (10%), which are summarized with average, good, very good, superior and excellent hips to one single group: HD-normal. How to recognize which are the best? The experience in the SV shows that in spite of this distortion the best sires are recognized, simply by the frequency of the different HD-classes in progeny and other relatives.

Running a test with only the traditionally recorded data showed that the animals can also be differentiated very well in their heredity level with these data. The old data are therefore indispensable as ancestor information.

The method for determining the inheritance level of all animals in a population is called “breeding value estimation”. The breeders in the SV are well aware of the procedure at HD. Now it is also applied to the size. For all breeders, the breeding value is currently available for all animals. The method is comparable to the HD breeding value evaluation, but there are differences.

The calculations are based on a mixed statistical model:

In this equation it is formulated how the wither height (WH) of an animal comes about. The basis is the inheritance level of the year 2015, which resulted from the breeding values of their parents, even before the animals themselves were measured. The fixed base is 64.5, which is to be equated later with the breeding value of 100.
A second standardization is that the male dogs are set as the standard. Bitches are thus awarded a supplement to be comparable with males. This surcharge is automatically calculated and taken into account. Currently the difference is 5.18 cm.

If animals are measured before the 13th month of life, this value is provisionally included. The influence of unfinished growth is determined and taken into account. For the time being, the value is replaced when a new value arrives at a higher age. Values that arrive after the 12 month period are summarized in an average. This average is becoming more and more accurate, since some of the "other influences", e.g. measuring error, on average will cancel.

Statistics have shown that summer pups are slightly smaller than winter pups. This is minimal, up to 1.5 mm smaller, but since always a whole litter, sometimes several litters of a freshly used dog are subject to this advantage or disadvantage, it is useful to calculate the month effect and correct for it.

The effects mentioned are the so-called fixed effects, which are determined in the mixed model (mixed model estimates). But the most important thing is the estimation of the genetic predisposition. This genetic deviation from the base is the breeding value, the prognosis of heredity (mixed model prediction). For this calculation it is necessary to introduce additional knowledge. At first it is necessary to know, how the animals are related to each other. This is estimated by the computer itself, if he knows father and mother of each animal. Then it is necessary to know, how much the trait is determined by the genotype and how much by environmental factors. This is the heritability. Finally we have to estimate before starting, how much / little repeated measurements on the same animal vary (repeatability). All these prior information are so-called genetic parameters.

The above equation can be set up for each animal, combined with the genetic parameters. The effects presented in the model are initially unknown. In the currently nearly one million stored dogs, more than 160 thousand animals are selected, which are measured and / or contribute as breeding animals to the determination of relationships. This results in more than 160000 equations with same number of unknowns. If this system of equations is solved, the unknowns become known. These are the breeding values and the fixed effects. For the non-tested animals the breeding value is derived from the parents' average. Thus all animals have a breeding value.

The base (is set to 64.5) is thereafter indicated as 100, i.e. dogs which do not differ from that base receive a breeding value of 100. Each millimeter deviation is assigned to one point so that, for example, a dog with an inheritance expectation of plus one cm (10 mm) will come out with a breeding value of 110. These relative breeding values are then published.

A documentation is developed to show what the breeding value is based on, how much information is obtained from the knowledge of the parents' lines, what the measurements on the dog contribute, and what additional knowledge the already measured offspring contribute.

Use of breeding values

Do we need breeding values, one will ask, when one hears, that size has a high heritability. That's a good question. Heritability is the agreement between progeny and the average of both parents. Heritability for wither height in the German Shepard was found to be about 50% in the used data material. The measuring error variance is approx. 25%, the remaining 25% are non-hereditary influences, which permanently exist in the dog and are always measured along with measurement repetitions. One could have satisfying success in breeding under strong Selection.

But breeding value evaluation has remarkable advantages. Estimated breeding values are not constant, they are always re-adjusted. They are already existing at the time of mating, so before the birth! They exist during the period of rearing, always up-to-date and corrected by measured siblings of previous litters and / or uncles / aunts / cousins. Then they are significantly corrected when the dog is measured itself. Now the littermates, up to that moment with equal expectation, can be differentiated. Finally, when a dog is used for breeding, the progeny is watched. Breeding values are always updated when offspring occur on shows. Breeding values show clearly, whether a 65 cm dog may be breed smaller or larger than other 65 cm dogs.

In work is a second contribution about the breeding values and the effects in the first computation, a comment on the breeding plan and the success expectation.

However, with all interest in breeding values one must know that breeding values are only descriptive. Each breeder can include these values for his own breeding decisions. This is a helpful service of the breed club. The selection gain depends on the difference between the population and the used stud dogs and bitches. One has to observe, what breeders do.

Another thing is breeding from the perspective of the breeding association. There is a responsibility to respect the international standard. If the association accepts the desired pluralistic aims of breeders within the limits of the standard, then only a breeding plan guarantees to reach this. At the moment too many individuals are outside the limits. A strict culling level would kick out too many good dogs. One has to take time to go back to the roots, consequently, but gently in small steps.